What is Samyaka Sambodhi in Buddhism?

Around 2600 years ago a prince of the Shakya clan named Siddhartha achieved the supreme state of awareness, possible for any mortal being which we call as ‘Enlightenment’.  Meanwhile, while achieving the supreme state of enlightenemnt; he also attained the supreme wisdom regarding the functioning of reality. Eventually, he made a decision to teach others about the ways, through which they can also tap into the zone of this state of what we call as ‘liberation from the cycle of rebirth’ or ‘enlightenment’.

In brief we can also say that this concept of supreme wisdom, itself is called as Samyak Sambodhi; which eventually enables a person to witness the causes of the ‘cycle of rebirth’. However, as this statement is highly superficial and over-simplified; a detailed elaboration of the subject is needed to realize about the gravitas of the term, we call as ‘Samyak Sambodhi’.

An introduction to Samyak Sambodhi.

SamyakSambodhi is a term used in Buddhism which perfectly represents the ultimate state of wisdom, attained by a completely enlightened person; which eventually provides him the supreme insight regarding the ‘functioning of the reality’. This supreme wisdom also enables a Buddha to reach through the hidden Buddha or divine potential, within an individual and trigger it with the right knowledge; which is best suited for the student present in front of him. Thus, Buddha is more than an enlightened being as he is also a compassionate teacher who teach others and becomes responsible for the ‘enlightenment of the masses’.

One can easily witness the depth of this supreme wisdom within the central teaching of the Shakyamuni Buddha; who established the core of Buddhism in his very first sermon which is called as Dhammachakka Pravartana Sutta, commonly called as the Four Noble Truths.

Now, although this article is not about the Four Noble Truths, yet it is highly recommended to know about these; while considering the fact that the straight forward talk of the Buddha spoken around 2600 years ago, still acts as the foundation stone within the whole of Buddhism.

Let me remind you though that its essence can be easily missed, as the teachings are highly refined in nature. On the other side, it also provides an opportunity to gain insight by going deeper into the meditation and contemplate over the essence of the Four Noble Truths. Thus, it is only after going through some spiritual advancements, one starts to demystify the sheer intensity of the supreme wisdom of the Buddha.

So let me present you the Four Noble Truths which are as follows: 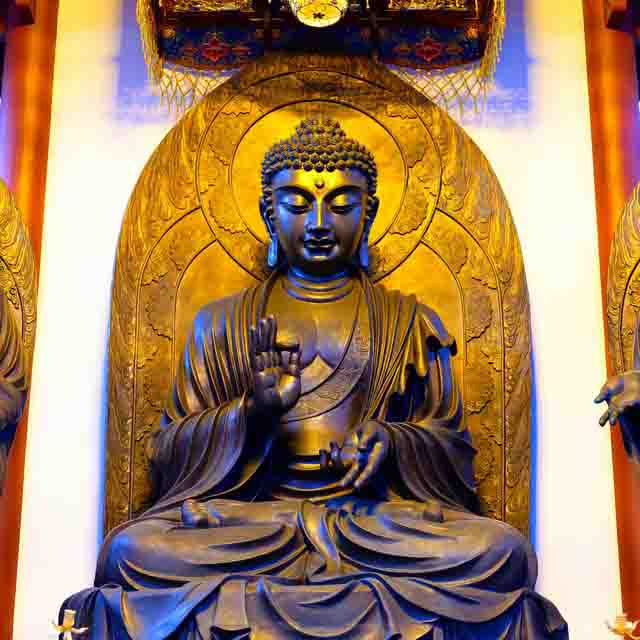 1 – Dukkha [ Pain and Dissatifaction ] –   The first noble truth clearly propagates the idea that the we always stay in the state of dissatisfaction and pain. For an easier comprehension, learn that the term ‘dissatisfaction’ sits at the very core of our lives.

2 –  Samudaya  [Arising] – The dissatisfaction and displeasure comes from the fact that our mind is always wishful and full of cravings [tanha in PALI]. The clinging nature of mind commonly called as desires, always act as the cause of suffering.

3 – Nirodha [Cessation]  – The cessation of suffering can only be stopped if the mind learns to overcome its own craving nature.

4 – Marga [Path]– The Noble Eightfold Path effectively trains the mind to be freed from its state of continuous cravings.

Click here to know more about the Four Noble truths.

Now, all of this might sound utterly simple, or one might be thinking like indeed it is true; but what is so special about that or how does it relate with the topic of Samyak Sambodhi?

That is where the Buddha’s insight can easily be seen while he straight away discusses the whole essence of Buddhism, in merely a couple of words, which we call as the Four Noble Truths.

This is a classic Vedantin example which I am going to use it over here.

We all know about the ocean. It is a huge water body. We also know that there are infinite waves within the ocean. However, let me ask you a question before proceeding further. Do you really think that the waves are different or separate from the ocean?

There can be no another answer to this question but a big NO.

Every single separate looking wave is actually nothing else but the ocean. It only seems separate to us because the air current acting upon the ocean resulting in the production of waves of different sizes.

Every single of these waves, is completely unified with the ocean. Or in simple terms, these waves are the ocean. Our minds are always holding to various definitions related with the name and forms of any object. Thus, it might trick us to believe that the waves are different from the ocean; as these waves also have a specific form. This form, which at least looks elevated, presents an illusion in front of the mind that these waves are separate from the huge water body called as the ocean.

Now, what would happen of someone is able to know about the hidden causes behind the production of every single wave? Be it in the context of change of temperature or the change in air current or any other hidden reason behind the production of any wave; the knowledge doesn’t even halt at this point too. It goes all the way upto the every single minutiae of the details. Just try to imagine that this awareness goes so deep, that it defies the rules implied upon the seemingly limited vision and limited intelligence of an individual.

You might name it as infinite amount of awareness, absolute consciousness etc. But in the Buddhism, it is termed as the Samyak Sambodhi or the knowing at the supreme level.

Let’s imagine that there is a rain droplet which fell from the skies in front of you. Now, ask yourself this question. Do you really know about the origination of that single droplet? The usual answer is something like that it was the rise in temperature which caused the water to turn into a vapor and then the vapors collectively form the cloud and in the end, it rains.

Now the second question in this sequence will be; what caused the rise in temperature? We might again argue that it is the movement of the Earth, around the Sun, which eventually result in the various types of climatic conditions.

Well, we have another question in line which asks us, what caused the Sun to be hot? The usual answer is that the Sun is constantly going through nuclear fission and the heat is generated within the process.

However let’s proceed further and ask ourselves; why the Sun is even present there? One might again come up with an answer that the whole universe came into existence around 13.8 billion years ago, after which the Universe is constantly disintegrating into newer forms; while every single form is carrying some unique qualities. 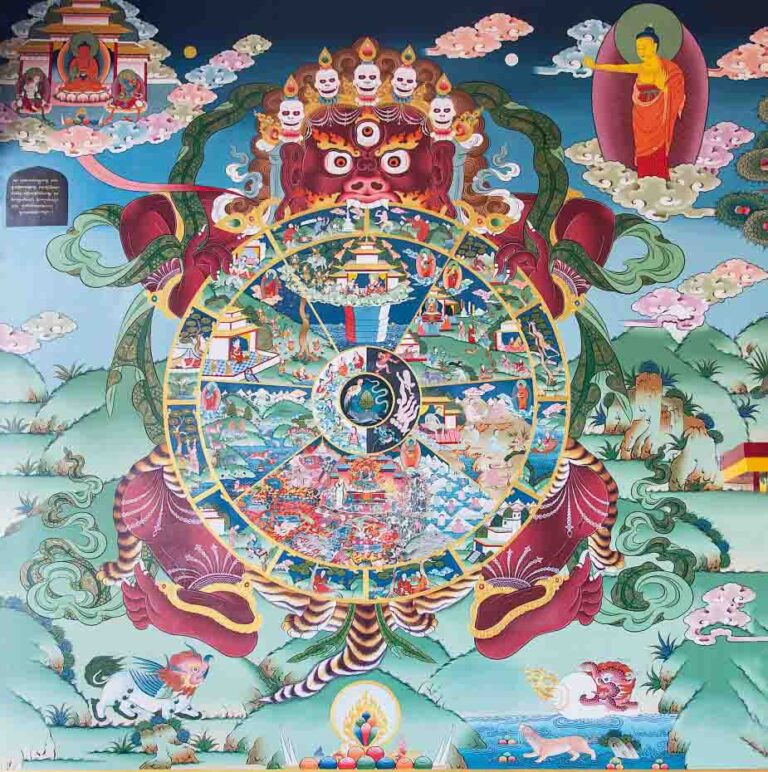 Now the most important question is that, what about the rain drop which fell in front of you? Do you think it was originated with the event of Big Bang or was it always there? Just like the wave… Furthermore, what about our own bodies? What were WE before the Big Bang occurred?

Now let’s relate all of these questions with the topic of Samyak Sambodhi. For the sake of human understanding, we can say that a Buddha knows all the answers to all of these questions. We can also say that a Buddha knows about every cause and effect regarding every possible living or non-living event which came into existence into the past or will ever occur into the future.

However, let me remind you again, that he doesn’t hold the knowledge of these answers on a superficial level. Instead we can easily find out that his knowing about every possible question is so refined that it seems like he no longer exists into the known dimensions of Nature. The truth is that a Buddha might look simply present, just like any other individual, while he is being seated in front of you. Yet his supreme knowing clearly indicates that he is fully aware of every part of the existence and actually is omnipresent. Not only that, his seemingly vast wisdom also proposes an idea in the front of a limited mind of an individual, that he also holds an absolute state of omniscience too. I can only hope that with the help of these words, we become able to comprehend over the absolute state of knowing of the Buddha.

I just want to say at the end, that the teachings of the Buddha feel supremely accurate, intimate and always sticking to the context. His first sermon, called the Four Noble Truths clearly makes us believe that such a perspective can only be achieved after someone is carrying a bird’s eye view. No wonder that his teachings sound authoritative and dry at times. He never consumes time while going through useless discussions; instead, he only motivates an individual to find out the truth, all by himself. That’s the truth of Samyak Sambodhi of a Buddha, from a normal human perspective.